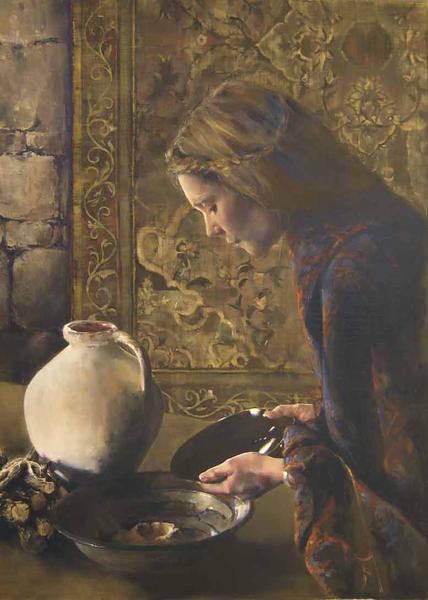 The story of the prophet Elijah and the widow in Zarepheth is a remarkable story of faith, sacrifice and miracles. The Lord asked Elijah to go to Zarepheth, a land that would be facing a three year drought and famine. The Lord told Elijah there would be a widow there who would sustain him. As he approached the city walls, he saw the widow and did exactly as the Lord commanded: he asked her for some precious water and bread. In a drought and famine. In starvation and thirst.

Elijah had faith in what the Lord asked him to do, and surely this fearful and heart wrenching task was not lost on him. He told her to not be afraid, but to make some bread for him first, and then some for her and her son. He then prophesied in the name of God that her barrel would never be empty. With this promise by a prophet, she acted in obedience and faith when she had nothing left to give.

Her faith in a prophet of God was further strengthened when her terminally ill son died and Elijah raised him from the dead. She exclaimed, “Now by this I know that thou art a man of God, and that the word of the Lord in thy mouth is truth.” (1 Kings 17:24)

Following a prophet and learning the importance of sacrifice is the story of our day. It may take social sacrifice and courage to follow a prophet when his teachings are counter-cultural. It certainly takes courage to follow Christ’s doctrine on the family. It takes courage and sacrifice to have a family in a world doesn’t love sacrifice (self-love, self-care) and in a world where motherhood and fatherhood can be seen as burdens on careers, travel, and social life.

Yet by divine design, almost every single life of family life requires sacrifice because “families are central to God’s plan of happiness the family is central to the Creator’s plan for the eternal destiny of His children.” (Paragraph 1 Family Proclamation)

Just like the widow of Zarepheth, our sacrifices are beautiful in the end. The promise is there.

Sacrifice truly brings forth the blessings of heaven.

art: Women in the Scriptures